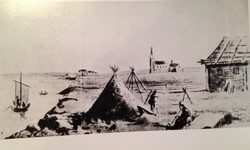 The Devon Mission began on the recommendation of British explorer Sir John Franklin, who passed through the area in 1819 and 1825 while investigating overland routes in his quest for the Northwest Passage.  After Franklin contacted the Church of England, Rev. John West was dispatched to Rupert’s Land in 1820.  Upon arrival, West headed south, taking several Aboriginal boys to train and send in his stead.  In June 1840, Henry Budd (d. 1875), one of the boys who was originally from Norway House, arrived at Opaskwayak to establish Manitoba’s first inland mission beyond the Red River Settlement.

David Anderson, the first Bishop of Rupert’s Land, ordained Henry Budd as deacon on Dec. 22, 1850.  In 1852, Budd became one of the first Aboriginal people in North America to be ordained priest.   Budd went on to minister in communities across a 500 km expanse.   One hundred and seventy-five years after its founding, Devon Mission continues bearing fruit.