Action Against Hunger is at the forefront of current crises in Yemen, Somalia, and South Sudan where child malnutrition rates are at their highest, with women and children being particularly vulnerable due to the breakdown of health services, poor water and sanitation, and lack of access to health services. Each country's crisis has been exacerbated by political conflict and recurring droughts.

We are actively working in the following countries:

In Yemen, our nutrition and health programs provide support for acutely malnourished children under five and their mothers. Our food security and livelihoods programs allow the direct distribution of food or money. We are training health workers and treating suspected cases of cholera in conflict zones. In 2017, we reached 648,980 people in Yemen.

In Somalia, we are screening and treating children and pregnant and breastfeeding women for acute malnutrition. Our programs help vulnerable people access food and essential basic services through cash transfer programs. In 2017, we reached 713,033 people.

We have longstanding operations in South Sudan, especially in Jonglei, Northern Bahr el Ghazal, and Warrap. We are providing life-saving treatment to acutely malnourished children, we have been rehabilitating boreholes to improve community access to safe, clean drinking water. In 2017, we reached 313,250 people.

Action Against Hunger is a global humanitarian organization that takes decisive action against the causes and effects of hunger.

We save the lives of severely malnourished children while helping communities become self-sufficient. Recognized as a world leader in the fight against malnutrition, Action Against Hunger has pursued its vision of a world without hunger for almost four decades, combating hunger in emergency situations of conflict, natural disaster, and chronic food insecurity. With more than 7,500 staff in nearly 50 countries, our programs in nutrition, food security, livelihoods, water, sanitation, and hygiene, reach more than 20 million people each year. 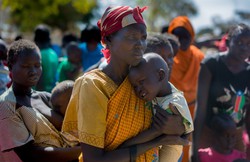