On Tuesday, August 4th, a large explosion occurred in the Lebanese capital of Beirut. Over 4 million people have been affected including 135 dead and 5,000 injured. Four of the city’s hospitals are out of service as a result of the blast. With thousands of people injured, the remaining operational hospitals are overwhelmed. More than 300,000 people have been displaced and a two week state of emergency has been declared. GlobalMedic is preparing to send Family Emergency Kits and Emergency Food Kits to families affected by the explosion. The Family Emergency Kits include a water purification system, basic hygiene items, and a solar light. The Emergency Food Kits will provide families with culturally appropriate dried food items. Donate today to support our Lebanon Explosion Response. 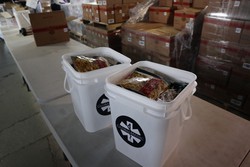