About the LOST Window

The Eliza Merrington Chapel attached to St John's Anglican Church in Prescott, Ontario, was built in the 1930's in neo-gothic style.  It featured a beautiful stained glass window depicting the Nativity with a side panel of modern children praising the newborn King.  This colourful masterpiece by acclaimed artist, Guido Nincheri was listed among his installations simply as "St. John's Church, Prescott". Curators had assumed it meant the counties of Prescott-Russell near the Quebec border but could never find it. It was deemed to be lost.

With the sale of the chapel in 2013, the small congregation borrowed funds to restore and relocate this work of art, saving it for future generations to enjoy inside their Gothic Revival church.

Friends of St John's is a group focused on the historical and cultural value of pre-Confederation Canadian Gothic Revival architecture in small town Ontario. Often these are churches without the means to maintain this inheritance. We intend to ensure a tangible piece of history for generations to come, one Gothic Revival church at a time, regardless of religion or politics. 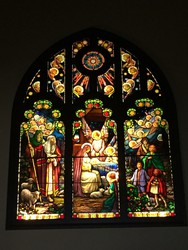