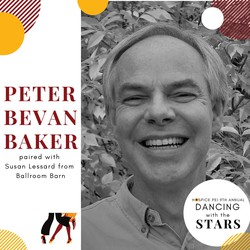 Peter grew up in the Highlands of Scotland where as a wee boy back in the mists of time, when he was more coordinated and less inflexible, he learned Scottish Country Dancing. None of that dancing heritage will be on display as he stumbles and staggers his way around the dance floor in 2020.

Aside from his illustrious dancing pedigree, Peter studied music, became a dentist, and finally in May 2015, after two and a half decades of political futility, he was elected as the first Green Party member of the PEI Provincial Legislature. He now leads the Official Opposition and occasionally dreams of dancing rhetorical rings around his fellow Legislators.

Peter is delighted to be a part of this year’s Dancing With The Stars and wishes to thank (and pre-emptively apologise to) his partner, Susan Lessard for whatever befalls us.