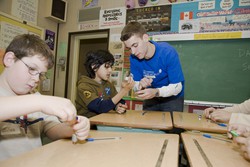 Science World is unique in providing children and families with access to cutting edge, curriculum-linked galleries, films and hands-on educational programs at TELUS World of Science in Vancouver. Our facility also houses the OMNIMAX® Theatre, which features one of the largest dome screens in the world. Science World endeavours to touch the lives of more British Columbian families and students each year, and has connected with nearly eight million visitors since opening in 1989.