Step By Step's mission is to address the critical shortage of organ and tissue donation by empowering students to inspire the public, media and all levels of government.

Step By Step is a charity established by George Marcello in 1996.

In 1997, after receiving a life saving liver transplant, he started walking across Canada (12,000 km) to thank his anonymous donor

On June 13 2000, he received the famous Torch Of Life by an anonymous donor.

On Septemeber 5 2001, he was asked to bring the Torch to Vatican City, where Pope John Paul II blessed it, and called organ & tissue donations a Genuine Act Of Love and wisely encouraged the young people to carry its message. Since then, we have referred to our charity as the Torch of Life George's walk shattered the world's perception that organ transplants was voodoo medicine and advanced this issue in many ways.

In 2004, (Step By Step's 4th Campaign Kristopher's Wish) 13 year old Kristopher Knowles carried the Torch through 200 cities & towns in Canada. He inspired over a million kids.

From 2007 to 2010, (Step By Step's 6th & 7th Campaigns SOS4000 & SOSTheAmericas) thousands of young people from Canada & USA, were chosen to be Student Torch Of Life Champions.They carried the Torch and represented their respective communities and inspired people worldwide.

In Toronto, June 19 2012, on his last day of the walk Khaled passed the Torch to 20 year old Israeli girl Yael Gladstone. Their stories reached the world and were supported by world leaders. In Jenin, Palestine, November 2005, Khaled's 12 year old brother Ahmed was shot by an IDF Soldier and died, he joined his family in donating his organs to Israeli children. In Tel Aviv, Israel, September 2002, Yael's 19 year old brother Yoni died by a Palestinian Suicide Bomber and her family donatied his kidney to a Palestinian young girl.

We believe by having young champions promote organ & tissue donations,they can save many lives & inspire hope and bring the world a little bit closer

"Please Don't Take Your Organs To Heaven, God Knows We Need Them Here On Earth"

"The Torch Of Life has been touched & carried by over a million people around the world. We can make that a billion"

"If we can inspire half the world's population in becoming organ donors, millions of lives could be saved" 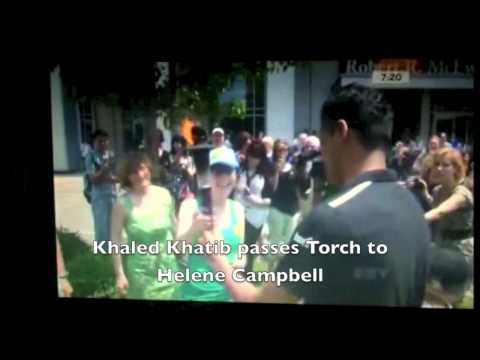