Hero of the shadow

Since 1996, the indigenous Raposa Serra do Sol Training and Culture Center, CIFCRSS, has been a strategic location for the training of indigenous youth. A center as dream of many isolated villages.

After the registration of native lands, its officials did not spare their efforts. In addition to enabling young people to obtain a high school diploma, they offer them training in agri-food technology and environmental management, an amalgam of current knowledge and traditional knowledge.

Father Gabriel, in charge of the Center, is one of those heroes who, with empathy, accompanies young people on their journey and helps them to restore their confidence. He is proud to tell me that today over 80 young graduates work in Aboriginal communities as leaders, teachers or community workers. He even adds that many continue their studies at the university, mainly in land and environmental management.

All this would be perfect, he tells me, if the Center had suffered significant damage from the climate and a fire arrests occurred in 2005. The electrical installations are precarious, several threads run on the walls faded others hang from the ceiling, a disturbing situation. "We do not want to repair the old one, we want to install something new to: a pump from the Surumu River to carry the water to the agricultural zone where the young people put their learning into practice. They work hard, it would be a way to recognize their efforts and a very profitable innovation! In all, I would need 60,000 Reais, oh, sorry, about $ 21,000, to get the Center back on track."

CIFCRSS, it would take several, there, here, everywhere, to promote local production, to safeguard the common good, to learn to respect the human heritage and biodiversity. The indigenous people of the Raposa do Solen region know one thing: they are not in their first fight against the unscrupulous exploiters who come with promises that have never been realized. "Give us the right tools: from the heart, we have to sell !" 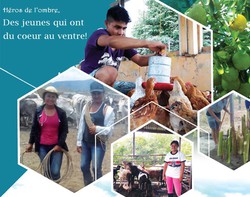