"Swinging for Winnipeg" – A Matching Campaign

Outside the March is delighted to announce that our latest immersive production will receive a World Premiere at the Winnipeg Jewish Theatre in 2019. But to get it there we need your help.

Chosen from 250 applications as part of our Forward March call for submissions, The Golem's Mighty Swing is an immersive puppet adaptation of James Sturm’s classic graphic novel, exploring prejudice, plagiarism, cultural appropriation and the cost of compromising ones ideals. It follows the Stars of David – a 1920s barnstorming, Jewish baseball team that travels small town America playing exhibition games, crossing thousands of miles in their tour bus.

Marcus Jamin is the creator, writer and puppet designer for The Golem's Mighty Swing. An award winning puppet designer, he created the puppets for Outside The March's celebrated production of Mr. Burns, a post-electric play in 2016. Marcus's work has been seen in theatres across the country and he has worked on puppet projects for both film and television.

We have had a generous donor come forward with a matching proposal: for every dollar we raise up to $7,500, The Bulmash - Siegel Fund will match dollar for dollar, meaning your donation goes even further. With your support, we can bring Outside the March's work to a national audience!

Help us knock this one out of the park!

More information about the production, visit the The Golem’s Mighty Swing page.

Outside the March creates unforgettable immersive encounters—redefining the experience of theatre for a new generation of audiences.

We are dedicated to pioneering work that is:

NEW: urgent stories that grapple with our here and now

WIDE-REACHING: inviting and exciting audiences who don’t normally find themselves at the theatre

COMMUNAL: forging resonant collaborations between artists of all levels of experience

Over the past eight years, we have become one of Canada’s leading immersive theatre companies, inviting our audiences to play with us in kindergarten classrooms, parade with Queen Elizabeth along the Danforth, tinker in garages, congregate in churches, venture out on a 911 paramedic call, weather the apocalypse in an abandoned adult movie theatre, infuse an old funeral home with love, and join us up onstage at the Royal Alexandra Theatre. 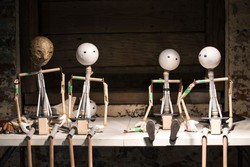