South Sudan is in the midst of a catastrophic humanitarian crisis driven by three years of  brutal civil war. More than 6 million people (half of the population) are facing extreme hunger, and 7.5 million people are in need of humanitarian aid. More than one million of those facing malnutrition are children.

We are on the ground racing to get food, water and hygiene items to the most vulnerable people. In 2017 we have reached over 600,000 people with emergency and longer-term support.

Across the Horn of Africa 15 million people are in need of emergency food and water due to severe drought across Ethiopia, Somalia and Kenya.

Oxfam is providing immediate life-saving aid and working on long term solutions to end the drought. As of 28 September 2017, Oxfam had provided safe clean water, cash assistance and sanitation to 1.08 million people in Ethiopia, Kenya and Somaliland.

Almost three million people in Yemen have been forced to flee their homes due to bombing and fighting. 22 million people – 75 percent of Yemen population – are in need of emergency aid. 17 million Yemenis are suffering from food insecurity and malnutrition, including 8 million who are now on the brink of famine. Yemen is also the world’s worst ever recorded cholera outbreak, with over 1 million reported cases to date.

How is Oxfam responding?

Oxfam is on the ground, reaching the most affected with the emergency help they need to survive. We are:

We can stop the worst from happening. You can save lives by supporting Oxfam’s work providing emergency help to those who need it most. 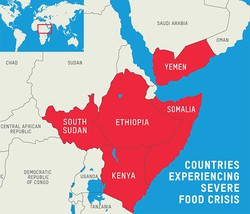