When it comes to porpoises, we have more questions than answers. Several species have not been assessed for an update of their conservation status for a long time, sometimes no data has been collected for decades, and it is unclear whether a population is increasing or declining. A status of "Data Deficient" often means that no actions are taken to conserve a species and its habitat. Long-term research is absolutely vital to inform species and habitat management decisions to help protect porpoises and their habitats.

Burmeister's porpoise are among the least studied of the seven species of porpoise, and some of the most poorly understood cetaceans. The species is facing numerous threats and has recently been classified as "near threatened" on the IUCN Red List of Threatened Species. Burmeister’s porpoise face a number of environmental threats, but they are also shot and harpooned for use as crab bait in southern Chile, and caught deliberately and as by-catch in Peruvian waters (as shark bait or for human consumption). We are conducting vessel-based surveys of Burmeister's porpoise in Mejillones Bay, in the Antofagasta province of Chile to fill some of the data gaps, and to answer important questions relevant to the conservation of this species.

We are conducting this study as a pilot project which we hope to continue indefinitely and use the methods developed for other study sites in Chile and Peru to inform government agencies and work towards the implementation of meaningful conservation measures. 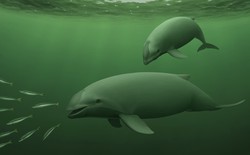