The Big Lubowski Needs Your Help

The Big Lubowski was a lost dog in a big pound with no where to go. He was covered in bite wounds, he was completely blind, his eyes were infected, his ears completely mangled and his teeth were mangled beyond recognition.

Lubowski is the sweetest most easy going dog. He doesn't have a mean bone in his body! We believe that at some point in his life he was a loved pet as it appears when he was young he had received an expensive double knee surgery.

Somewhere along the way Lubowski was passed around and we believe he was used as a bait dog. We won't describe what that is, but it is a horrible form of animal abuse that no dog should be subjected to.

Safe with us now, Lubowski is still receiving extensive vetting care. We were able to save his ears from being ravaged by infection. He will need extensive dental work and follow up care.

He has an amazing heart and has been so kind to us despite his horrible tumultuous life! 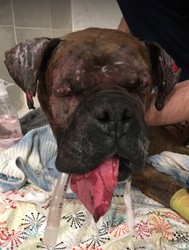