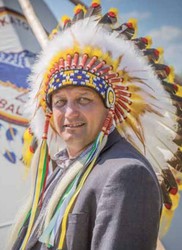 "I have a passion of making a difference in people's lives so they can have a quality of life. I see that in 2020 that they are still many difficult circumstances that are affecting First Nations people. As a First Nation person, we are the fastest growing population in Saskatchewan and we have the potential to be the next generation of the workforce. I believe that supporting change for First Nations people, and all people for that matter, through programs like Sanctum will make the impact that we need to change the economy.”