Save A Family Plan

Registered Name: Save A Family Plan 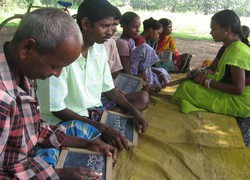 Save A Family Plan (SAFP) is a Canadian international development organization and a registered charity in Canada and the United States. SAFP encourages those from developed countries to work for justice and social change by assisting poor families and communities in India through a myriad of developmental activities under two main programs:

SAFP also works in partnership with various government agencies and local institutions in Canada and India.

SAFP began with inspiration received from Pope Paul VI at the International Eucharistic Congress in Bombay (now Mumbai), India in December 1964. Monsignor Augustine John Kandathil (Father Gus), a priest from the Archdiocese of Ernakulam, South India, heard the appeal by Pope Paul VI to the world to join him in a non-violent battle against poverty and hunger in countries like India. SAFP was born in 1965, assisting five poor families in the southwestern state of Kerala, India.

100% of all donations received by SAFP reaches the poor. This consistently has been accomplished since 1965. It is achieved by keeping administrative costs to a minimum. The operational costs are met by interest earned on short and long-term investments.

The Family Development Program has been the core program of SAFP since 1965. Through economic and social development initiatives, poor families are able to realize their overall development, leading ultimately towards sustainable communities and a healthier society. This is accomplished by identifying the most vulnerable families in targeted areas and providing them with financial assistance for six years to help begin and maintain an income generating livelihood, leading to eventual self-reliance. Local community financing/resource mobilization is encouraged, and families undergo entrepreneurial development training. Involvement in sanghams or self-help groups helps individuals gain the confidence and skills necessary for success. More than 50,000 families have been assisted to become self-reliant. At present more than 11,000 families are being assisted on a monthly basis. A monthly contribution $20 or $240 yearly will assist a family through this program.