Shakespeare in the Ruff

Registered Name: Shakespeare in the Ruff

Shakespeare in The Ruff would like to tell you about some of our other projects that you can support for Giving Tuesday!

The Incubator is Ruff’s new play development program, where playwrights use Shakespeare as an inspiration and have the chance to reinvent and rediscover his works with their modern lens. The Incubator was the birthplace of PORTIA’S JULIUS CAESAR, written by Kaitlyn Riordan (which is currently having its second production at Hart House Theatre) and KING LEAR @ THE BASEBALL DIAMOND, created by Christopher Manousos, which was a site-specific, spontaneous theatre experiment where audience members played baseball with Lear’s feuding daughters.

ARIEL & CALIBAN by Mumbi Tindyebwa Otu: exploring the island of The Tempest before colonization, Mumbi hones in on some of the characters that were originally there, and what it means to capture the "magic" of an island.

1939; OR WHAT YOU WILL by Jani Lauzon & Kaitlyn Riordan: When the King and Queen of England plan a trip to an Indian Residential School in Ontario, the students are faced with the task of putting on a Shakespeare play. The students, however, are ready to challenge their teacher's notions that there's only one way to do Shakespeare.

UNTAMED by Eva Barrie:  Inspired by Taming of the Shrew and Lysistrata, Untamed explores female misogyny, feminist movements, and how the political shapes our most personal interactions. Part verse and part clown, Untamed is unsettling and provacative. Alongside support from Ruff, Untamed is also generously supported by Factory Theatre and the Ontario Arts Council.
To help us keep creating inventive, exciting Bard-infused work, we need your help. We’re hoping to raise $1000 by Tuesday, December 3rd - Giving Tuesday! All donations receive a tax-receipt. 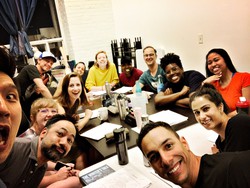