Feed a Tibetan Refugee for One Week

Your donation will feed a Tibetan refugee who has recently come to Canada for one week of their year-long sponsorship. Volunteers and donors on the Sunshine Coast of British Columbia are helping Tibetan families to resettle in Canada until the end of 2016. With your help we are able to support more families and provide the best of care to those who have arrived.

In 2007 His Holiness the Dalai Lama asked the Canadian government to consider allowing exiled Tibetans, who are currently struggling to survive as stateless displaced people in India, to resettle in Canada. He expressed particular concern for residents of the most impoverished Tibetan exile settlements in north-eastern Indian in the state of Arunachal Pradesh. In 2011 the Canadian government committed to welcome 1,000 Tibetans from that region to Canada over the next five years.

As part of this national project, Spirit Dance Centre is sponsoring and supporting Tibetan families who will resettle on the Sunshine Coast of British Columbia. During the first two years of this project, up until December 2014, we have brought four Tibetan families to the Sunshine Coast. They are successfully settling and most are now approaching independance. Another family of four will arrive in the next few weeks. During the second half of this project, from January 2015 until December 2016, we plan to bring five more families to the Coast. Each family is given extensive guidance and support for their first year in Canada. All the funding and assistance for their care is provided by volunteers and individual donors.

The Sunshine Coast offers a caring and welcoming community which will help the Tibetans adapt to their new country. In turn, the Coast and our growing multi-faith community will be deeply enriched by the richly compassionate and community-based faith and culture of the Tibetan families. 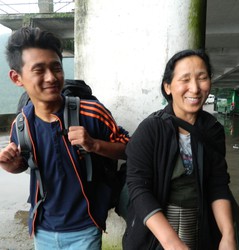