The Reverend Pierre Celestin Niyongere is an Anglican Priest from Burundi. He, along with his wife Jeanine along with their daughter Abrah (12), and three sons Shawn David (10), Jeff (8) and Ken (5), are being sponsored by St John’s Anglican Church York Mills, to come to Canada as refugees.

Why Pierre had to flee Burundi

In 2015, Hutu-Tutsis ethnic violence similar to the well-documented violence that had plagued Rwanda erupted. The two countries are side by side and share the same geography and history. Pierre had experienced similar violence in Burundi in the early 1990s when his father, Headmaster at an Anglican school in Bujumbura, was brutally murdered. At that time, as a teenager, Pierre had to escape by hiding under a bridge while others with him drowned and the hills were set afire. A more extensive history of Burundian violence can be found in the enclosed link:

When a new cycle of violence erupted in 2015, Pierre witnessed the murder of his neighbour. His church was bombed. He and Jeanine felt that it was no longer safe to stay in Burundi, so they escaped first to Rwanda and then (when extra-territorial squads pursued them there) they moved on to Uganda.

They have been in Uganda since Christmas of 2015.

Prior to fleeing to Uganda, Pierre had been selected to participate in a global conference of Anglican priests that was held annually in Canterbury, England. During the conference, he met The Reverend Tim Taylor, Associate Priest at St John’s York Mills. They struck up a friendship that continued after the conference. When Pierre arrived safely in Uganda with his family, he reached out to Tim via FaceBook and the effort to bring them to Canada began.

Initially, it was not possible to bring the family to Canada because the Canadian government felt that Uganda was a “Safe Third Country” so applications for resettlement were not considered. That policy shifted in 2018 and applications began to be processed.

Current Status of the Refugee Sponsorship

Pierre’s case was accepted as a “Named Sponsorship” by the Anglican-United Refugee Alliance in 2018. The family has been through the rigorous refugee interview process and has been through the medical examinations and inoculations. They are now awaiting the issue of visas which may happen at any time.

We are hoping that Pierre, Jeanine and family may even be in Canada by Christmas.

St. John’s has struck a strong Resettlement Committee that is actively working to put all the elements in place for their successful integration into Canadian society. 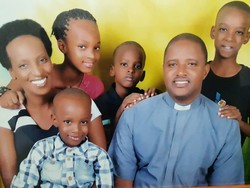