We are a group of Toronto friends who are helping Osama and his mother Khadijah during their first year as new permanent residents of Canada.

Osama and Khadijah were Palestinian refugees in Syria with the rest of their family of five when civil war broke out. Osama was a well-loved community leader in their camp whose deep commitment to volunteerism kept him living separately from his parents, older brother and younger sister when they were among a group of refugees arrested without cause, detained for weeks and subjected to harsh treatment and torture. Khadijah, her husband and their daughter were released; their other son was never released and to this day officials refuse to provide information about his fate. Khadijah also lost her husband soon after when he died of  his injuries. After these traumatizing events, and upon Osama's graduation from Damascus University, the family relocated to Lebanon where they lived as asylum seekers for nearly 5 years without UNHCR protection or the legal right to work. In that time, Osama's sister resettled in Canada through an undergraduate refugee sponsorship program. She has been studying at Western University and didn't see what's left of her family for nearly two years. On November 4, 2019, the family was reunited when Osama and Khadijah safely arrived in Canada. They have been through so much and deserve the opportunity to find peace and security as they begin a new chapter of their lives in Canada. Please help us give them a warm welcome. 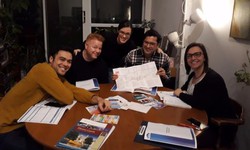