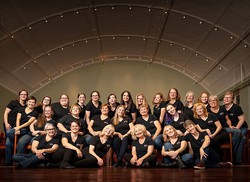 Now in their 43rd season, the Aeolian Singers is an auditioned women's choir based in Halifax, Nova Scotia. They are champions of music for women, and over the years have commissioned many new works by a range of Canadian composers, including music by singer/songwriters Susan Crowe, Connie Kaldor and the late Raylene Rankin. They’ve shared the stage with a who’s who of musicians in their innovative and moving programs, and made three recordings, including the Canadian premiere of the breast cancer oratorio, Where I Live, which they subsequently recorded.  They have performed with Symphony Nova Scotia and throughout Atlantic Canada, the U.K. and Europe. Halifax pianist Diana Torbert accompanies the Aeolians, and their Artistic Director is Heather Fraser