Help us raise a burrowing owl!

The BC Wildlife Park is home to the largest burrowing owl breeding program in the world! Every year we raise burrowing owls at our centre which are then released into the grasslands of British Columbia in April when the owls are almost a year old!

Why should you help us raise a burrowing owl? Burrowing owls in British Columbia are critically endangered! Biologists have recently counted only 50 wild owl individuals in the grasslands of BC! These owls are an important part of our grassland ecosystem. Without them our grassland habitat will be out of balance!

The BC Wildlife Park (BCWP) is working towards saving the Burrowing Owl from extinction.Our Species Survival Plan for the Endangered Burrowing Owl is to help stabilize a wild population in British Columbia.We are an active member of the Burrowing Owl Conservation Society (BOCS) of BC. Our goal is to achieve a stable and returning population of this migratory owl, habitat improvement and public education to prevent further habitat loss and destruction in BC's grasslands. The burrowing owl reintroduction program is a partnership between the BC Wildlife Park staff, the BOCS, the Ministry of Environment (MOE), many volunteers and private landowners in South and Central BC (Thompson- Nicola and Okanagan regions).

Burrowing Owls are small owls, less than 20cm tall, who migrate annually to the coast of Mexico and California. Birds are an important indicator of ecosystem health and can play important roles within the food chain of the grasslands.Burrowing owls were extirpated (locally extinct) from the British Columbia grasslands by 1980, as their population steadily declined from the 1920’s; the beginning of large-scale agricultural practices in Western Canada. These are the only owls in North America that live in underground burrows dug by mammals. As fossorial (digging) mammals like the black-footed ferret, ground squirrels and marmots were killed off on farmlands, natural burrows became rare. Rat poisons, DDT, insecticides led to a reduced and changing food supply and mammal trapping and killing caused the scarcity of natural burrows which all led to the burrowing owl population crashing in the 1970’s.

In the early 80’s and up to 1988, MOE translocated owls to BC without much success of those owls returning. In 1989, owls were brought into captivity in the BCWP and by 1990 we had established a breeding program with a new facility specifically designed for breeding a unique type of owl. In the early 90’s, owls were bred and 20+ owlets were released into artificial burrows in the grasslands each spring.

These artificial burrows are installed and maintained by volunteers with the BOCS. There have been over 1200 burrows installed in the wild since 1990 but with the annual maintenance required, many have disappeared into the earth. Around 400 artificial burrows are regularly maintained and still in use.In 2002 the BCWP constructed a larger breeding facility, and increased the offspring production from 20 to 50 each year with the ability to produce up to 100 offspring. As one of three facilities, we managed to produce half of the owls released to the wild each year. The design of the Burrowing Owl Recovery Centre was developed by staff at the British Columbia Wildlife Park. The facility and program is so successful that it has been copied by other facilities in North America. 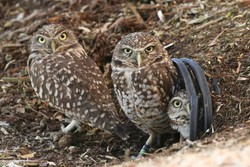