This endowment fund will be established by friends and family of Joyce Paynter to pay tribute to the legacy she left serving her country, her family and her community.

Originally from Leicester, England, Joyce was a proud veteran and British war bride. She was a private in the Canadian Armed Forces, Canadian Women's Army Corps assigned to the 43rd company out of Canada's military headquarters in London during the Second World War. She married Arthur Paynter in 1943 while volunteering with the British Red Cross and, without yet setting foot on Canadian soil, enlisted with the Canadian Armed Forces.

Joyce came to PEI via the Ile de France troop ship through Pier 21 in Halifax in 1945. Art and Joyce settled in French River where they farmed and were keepers of the Cape Tryon lighthouse until Art's health issues took them to Charlottetown. Art and Joyce worked as a houseparent team at the Sherwood Home until Art's passing in 1970. As a very young widow, Joyce devoted the remainder of her life to providing for her family and her community. She was a loyal and decorated member of The Royal Canadian Legion, being a member since 1962. She was a member of the Branch’s "Sick and Visiting Committee" for 12 years. An advocate for ex-service women, her efforts earned women the right to parade back to the Branch upon conclusion of the Remembrance Day ceremony and established a number of other firsts for female Veterans. Joyce became the first woman to serve as Honorary President of Branch No. 1 and of the Prince Edward Island Provincial Command.

Joyce has been associated with several community organizations, including the Poppy Campaign, Meals on Wheels, the Red Cross, 4-H, the Women's Institute, the Mentally and Physically Challenged and the Prince Edward Island Addiction Foundation, through which she helped form an Auxiliary for the Alcoholism Treatment Centre, Past President of the Women's Auxiliary for the Canadian National Institute for the Blind, an Assistant Director of Local 19 of the Prince Edward Island Government Retirees, Founding member of Big Brothers on PEI and a member of the Seniors Active Living Centre. She received the Minister of Veterans Affairs Commendation medal in 2002 in honor of her contributions to the care and well-being of veterans and also for her own sacrifices as a veteran.

Joyce was a lifelong advocate for peace, lived very lean and was her family was very important to her. She gave tirelessly to her community, her country and to her family. Joyce passed in July of 2019. 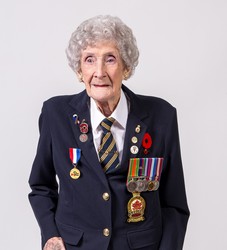