The Fernanda Salinas-Sanchez Memorial fund was created in loving memory of our daughter and sister Fernanda who sadly was taken from us prematurely at the age of 16 in a tragic car accident in Mexico on July 25th, 2016.

Fernanda was born in Mexico City on June 18th, 2000, and moved to Edmonton with her parents and older brother in 2008. Since early age she was an enthusiastic and dedicated athlete as well as an outstanding student.

She attended Westminster Junior High School in Edmonton from 2012 to 2015 and  was part of the women’s senior team of basketball during the three years of school. The team won the city championship once and twice the second place, in addition to multiple first place medals in various tournaments organized by junior high and high schools in Edmonton.

At High School she completed Grade 10 at Ross Sheppard High School in 2016 and she was part of the women’s senior teams of basketball and handball. Fernanda received the award as “Sport Woman of the year” for the Grade 10th students.

Both in Junior High and High School she was awarded with honors and distinctions for her academic performance every year, and she was always recognized for her great tenacity, empathy and her enormous willingness to help those who needed it.

We, her parents and brother, with the support of friends, teachers and coaches; have created this fund to provide awards  to honor her memory, keep alive her legacy and recognize the effort and talents of  outstanding young female athletes and students at Westminster Junior High School and  Ross Sheppard High School. 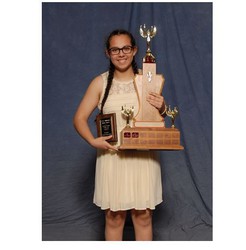