We transport observers back in time with historically accurate battle re-enactments, scrimmages and insight into the life of the 1812 militia companies. Our members are all dedicated volunteers who rely on donations and sponsorship from generous supporters who wish to preserve local history and educate the public through community events, functions and re-enactments.

The Company was formed to honour the contributions of volunteer militiamen and First Nations people from Toronto Township (now the City of Mississauga) who initially served in the Flank Companies of the 2nd Regiment of the York Militia. Many of them were present at and participated in many of the battles of the war along the Niagara frontier, including Chippawa, Burlington Heights, Fort Detroit, Fort Erie, Fort George, Fort York, Lundy’s Lane, Queenston Heights, St. David’s and Stoney Creek.

Thompson’s Company: Mission Statement: As members of Thompson’s Company, 2nd Regiment of York Militia, our mission is to educate, promote and re-enact the history of the War of 1812 and the lifestyles of the period in historic Mississauga, and the connections between militia volunteers from historic Mississauga and their service during the War of 1812.

Your support would help provide members with the supplies required to bring history to life such as gun powder, tents, uniforms and camp materials for the sutlers and historic merchants. 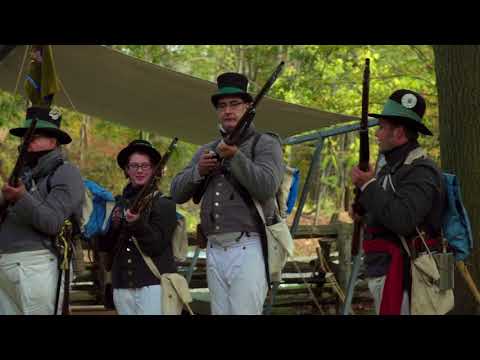