Emma (affectionately known as Emmy) is a beautiful Italian Maremma; at least 11½ yrs. She came to us on January 3rd, 2009, having been rescued from a horrifically neglectful situation. Emmy is one of only two canine residents who have been with us since her youth, and is one of our longest term residents.

Always a picky eater, as is a common trait of the breed, Emmy recently become so fussy, she refused almost everything we tried to give her, even her absolute all time favourite, roast chicken. After blood tests, X-rays, and an ultrasound, exploratory surgery revealed a large mass, approximately 2”x3” attached to the wall of her ileac artery, near her bladder and in a very difficult location. The mass showed evidence of having ruptured four times. It is a miracle she had survived this long. Emmy’s angels had been working overtime. So has her veterinary surgeon Dr Lorne, who used all of his expertise to remove this massive growth. He was able to peel off the growth, but due to its location was not able to take the usual wide margins along the artery wall required to ensure 100% removal of possible peripheral cancer cells.

Biopsies of the mass have revealed that it was a retro-peritoneal haemangiosarcoma, a cancer of the blood vessels, and one of the most aggressive forms of cancer found in dogs. 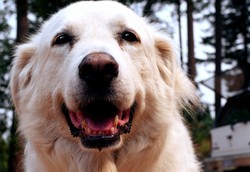