This fund was set up for family and friends of Bills to contribute to naming a carousel seat in memory.

HOLLANDS, William Bruce December 11, 1962 – January 15, 2018 It is with great sadness the family announce the unexpected passing of Bill Hollands at age 55 at -Comox Valley, B.C. Bill is survived by his mother and father Jack and Lucille, daughter Jordain (Ben) Ferrier, granddaughter Adysen, son Dru, sister Diane (Ron) Foreman, Brother Robert (Laura), also nieces and nephews Ben and Shannon, Dale and Keenan, Joni Lynn and Sara Thomas. He was predeceased by his brother Timothy in 2011. Bill graduated from high school at Shawnigan Lake, B.C. and fell in love with the Island. After managing a home medical store in Edmonton he moved to the Island accepting a position as Vancouver Island sales rep for a medical supply company. He had a great love of rugby and the fellowship with the Nor'wester rugby team. Bill also appreciated the Hollands Scottish heritage attending at numerous Robert Burns celebrations with the family. His ready wit and smile will be missed. 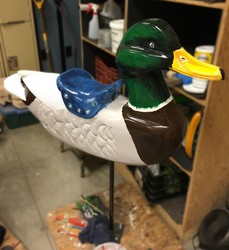