UNHCR is on the ground supporting refugees whose homes have been destroyed by Cyclone Idai.

A devastating cyclone has hit Mozambique, Zimbabwe and Malawi. As of 18 March, the Cyclone Idai has killed over 650 people across southern Africa with fatalities continuing to rise.

Some 12,000 refugees (3,000 families) out of the 13,000 living in Tongogara refugee camp, south-eastern Zimbabwe have had their shelters completely destroyed by the wind, rain and flooding.

UNHCR is already mobilizing emergency shelter and core relief items from our global stockpiles to support an initial 30,000 of the most vulnerable people affected by the cyclone in Mozambique, Zimbabwe and Malawi. But more response is urgently needed to reach all those affected by this disaster.

Due to the incredibly quick response of donors, UNHCR's first airlift arrived in Maputo on 27 March and the the emergency aid is being transported to Beira, the hardest-hit city by the disaster. Another flight will arrive in Malawi on 28 March, and a third one in Zimbabwe on 31 March.

We need to provide refugee families with family tents, plastic sheeting, kitchen items, sanitation facilities and clean water. Without emergency shelter families will be sleeping in the open or in overcrowded buildings. We also need to act now to prevent the spread of water-borne diseases like cholera. 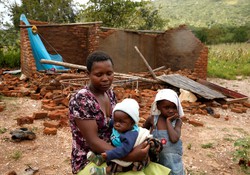