It’s July 2013. Two months into to my new position at CanadaHelps when I receive a call from 92nd Street Y, a New York based charity, about a new day dedicated to celebrating giving, happening the Tuesday right after two major days of commerce, Black Friday and Cyber Monday. Along with the UN Foundation, they had launched GivingTuesday in the United States a year earlier – and it had proven to be a phenomenal success. Now, they were looking to push the movement globally and were wondering if CanadaHelps would be interested in helping to bring this new movement, GivingTuesday, to Canada.

Coincidentally, I had already been discussing the possibility of launching a similar day in Canada with The GIV3 Foundation, a Montreal based charity dedicated to promoting giving in Canada. So, all of the pieces fit together and The GIV3 Foundation and CanadaHelps decided to launch GivingTuesday in Canada, with support from various other organizations, founding partners, and media partners.

Now in the final countdown to Canada’s third annual GivingTuesday, happening this December 1st, my belief in the importance of GivingTuesday is only stronger. Here are just a few reasons why. 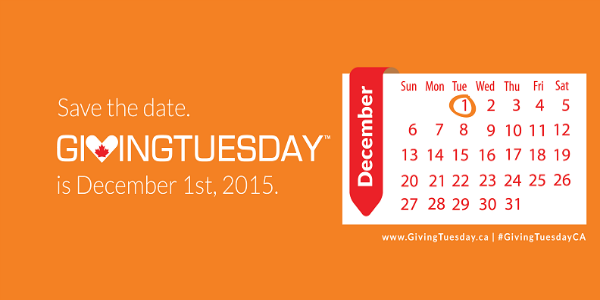 GivingTuesday has legs. It makes a difference.

GivingTuesday marks the opening day of the holiday giving season, encouraging individuals and organizations to join together and find innovative ways to give back to the charities, nonprofits, and causes that matter to them. GivingTuesday serves as a focal point in our collective efforts to make our society stronger and more caring.

It’s a simple call to action.  If you think giving back matters, show it on GivingTuesday. Donate your time, money, or goods like food and clothing.  Or, get conspicuous in your giving, promoting your favourite cause, sharing your personal story of how a charity has helped you or your family, or by simply spreading the word #GivingTuesdayCA.

By collectively coming together on a single day we can do something powerful: we can raise the consciousness of all Canadians on the importance of giving back.

While it’s a simple call, businesses, charities, public figures, media and Canadians alike are answering it. There are now over 4000 participating organizations in Canada alone. Public figures like Margaret Atwood, now Prime Minister Justin Trudeau, and over a dozen Mayors from cities across Canada have helped promote the day. Millions of Canadians have engaged, and GivingTuesday in past years has taken hold on social media and received extensive national and local coverage.

The result? Over the past two years, the impact of GivingTuesday in Canada has been evident. According to CanadaHelps data, the second annual GivingTuesday increased charitable donations in Canada by 75% on top of the previous year’s lift of 169%. And, many Canadians used GivingTuesday as an opportunity to commit to the ongoing work of charity, with the number of new monthly donations set-up using CanadaHelps increasing by 84%. Most importantly, this was not a shift in the day we give; donations each day through December – a month when annually 33% of annual donations are made — met or exceeded CanadaHelps expectations.

While the results in Canada have been amazing over the past two years, GivingTuesday has also resonated with people all across the globe. In 2014, over 68 countries participated in the movement, with over 30,000 partners across the globe. GivingTuesday is a movement which inspires us to grow in our giving life. Collectively, we can do something powerful. Every Canadian. Every charity. Every country.

GivingTuesday connects on a personal level.

Why has GivingTuesday taken hold while so many awareness days have floundered?

Giving is deeply personal and GivingTuesday is about supporting a cause that matters to you and in the way that you are comfortable and inspired to do. There is no right or wrong way to participate, as long as you are celebrating giving.

As a result, GivingTuesday meets Canadians where they are at in their giving life. If you are new to giving, it’s a day where you can more easily discover your cause as collectively nonprofit, for-profit and individuals share their stories.  For others it’s a day to grow in their giving life, expanding their giving mix to include a new charity whose work they value, or engaging further with a charity they already support by becoming a monthly donor or active volunteer.

Each year this grassroots movement has strengthened in its ability to connect on a personal level.  In 2014, there was a groundswell of activity organized by groups in cities across the country. Halifax, Ottawa, Guelph, Sarnia, Regina and Calgary are just a few examples; and many more cities are actively planning GivingTuesday Civic Movements for 2015.

GivingTuesday Civic Movements are about strengthening communities. They support the specific places where we work, live, connect, and are most directly impacted by the work that charities do in their local communities. They create opportunity for a deeper level of engagement between charities, businesses and local residents. They have the power to pull a community together and strengthen it as a whole, while also providing additional exposure for local charities. Often times, the small charities that are working tirelessly within a community, striving to make it a better place. Whether you’re needing more ideas on how to participate in GivingTuesday or are ready to actively help grow the movement, exploring GivingTuesday Civic Movements is a great way to get started.

What will you do this GivingTuesday?

Get started today. Commit to making a difference by sharing your GivingTuesday pledge on CanadaHelps. Learn more at www.GivingTuesday.ca. Join the conversation using #GivingTuesdayCA.