Canada’s first annual GivingTuesday was a tremendous success! According to our data, GivingTuesday increased charitable donations in Canada by 169% over the same Tuesday of last year.

We were so happy to be part of this amazing movement which encourages people to give back in any way they can. As a founding partner, we worked closely with GIV3 to bring this initiative to Canada, and show the world just how charitable and giving Canadians can be!

Our CEO, Marina Glogovac, had this to say: “GivingTuesday was a great way to jumpstart the giving season, but this is just the beginning. Charities typically see a huge increase in individual donations leading up to the holidays. As a platform for online giving, we want to ensure charities reach, and exceed their fundraising goals so they can continue to provide services that so many Canadians rely upon. We hope Canadians from coast to coast to coast are inspired to think about those in need throughout the giving season.”

So, what happens when over 1,300 Canadian charities and businesses come together in a collective, grass roots effort to launch engaging campaigns that promote giving back on the same day? The data we collected here at CanadaHelps shows that Canadians, in true fashion, respond generously!

The results of the day also demonstrated that the movement struck a chord with Canadians: 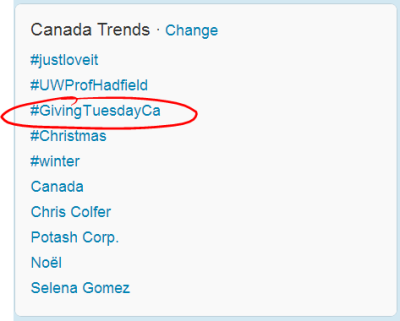