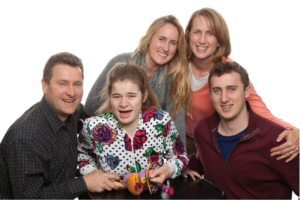 When I first entered the charitable sector eight years ago I started meeting the founders of some of the charities CanadaHelps works with, especially the smaller, grass-roots ones. The integrity and commitment of these amazing people inspired me, and it is the reason I am still here. Elisabeth Linton was one of those inspiring people.

Our first meeting was in her kitchen, her “office,” from which she initiated a worldwide effort to find a cure for her daughter’s illness with a Herculean effort while her daughter was in the adjacent room. Meeting her was one of those experiences that changed me forever.

Elisabeth runs The Sanfilippo Children’s Research Foundation (SCRF) which funds medical research for Sanfilippo syndrome and its related neurogenetic diseases. It is run solely by volunteers and has yearly committed at least 96 cents of every dollar donated to research. Twenty-two years ago, The SCRF began from a parent’s search for hope when she was given none.

When we first spoke, she was planning a fundraising expedition to scale Tanzania’s Mount Kilimanjaro. This effort ultimately raised over a quarter of a million dollars for the charity. Linton’s tenacity and the foundation’s dedication has resulted in progress for children affected by Sanfilippo syndrome worldwide. As we celebrate mothers on Sunday, May 9th, it felt appropriate to reconnect with her.

“It was urgent and necessary to start a charity that would create awareness for Sanfilippo syndrome, the terminal illness that our daughter Elisa had,” said Linton. The syndrome falls within a broader group of genetic disorders known as the Lysosomal Storage Disease. Children with Sanfilippo syndrome are missing an essential enzyme that breaks down a complex body sugar called heparan sulfate. This sugar will slowly build up in the bones, the brain and other organs, stopping normal development.

“When she was diagnosed she was still relatively healthy but we knew that the prognosis was going to be horrific,” said Linton. “The doctors basically told us there’s no research because there’s no money, and there’s no money because there’s not a lot of children with Sanfilippo syndrome. But what we believed was that if we started to raise funds for Sanfilippo syndrome research, what we learned in that research could apply to many more genetic and metabolic conditions and would help so many other diseases in the long run. That has proven true twenty years later.”

Without a cure and without any viable treatments for symptoms, this grassroots charity became the only one in Canada, and one of the very few in the world focused on Sanfilippo Syndrome. It funded seed research which was then used to propel doctors and researchers towards larger grants and funding.

They have also worked with similar charities worldwide to pool resources to help create Abeona Therapeutics, a gene and cell therapy company, which started clinical trials on gene therapy treatment through Nationwide Children’s Hospital in Columbus, Ohio five years ago.  “We were one of the very first gene therapy trials in the US for children,” said Linton. “When we started, it opened up the door to so many different children’s illnesses getting their own approvals to start. Even though it was different gene therapy, we paved the way for them. There’s been a domino effect.”

Like so many charities, COVID-19 led to the cancellation of their annual fundraising gala—which was to commemorate the 20th anniversary of the charity in 2020. What’s worse, the cancellation resulted in a legal battle with the venue over the charity’s $20,000 deposit. Beautifully, a number of event venues reached out to The SCRF to offer their spaces instead (and to absorb the $20,000 loss). Perhaps they were as inspired as I was by Elisabeth’s work.

In 2017, The SCRF established The Elisa Linton Sanfilippo Research Laboratory at Ste. Justine Children’s Hospital in Montreal. It was created through a $1M endowment, and named for Linton’s daughter, Elisa,  who was claimed by the syndrome in late 2016. The SCRF has also contributed over $1M through purchasing equipment for and funding research at Toronto’s SickKids hospital. They plan to continue to fund research here in Canada.

“Over the years it’s been about investing in worldwide research just to get to the point where we can go to clinical trials on something,” said Linton. “Now that we’ve reached that point and that research is happening outside of this country and moving forward, we’ve established labs here in Canada. Our goal is to continue to attract scientists and researchers and to invest in the medical community here.”

“I’ll leave you with an analogy from Dr. Joe Clarke, the now-retired head of metabolic genetics at SickKids,” said Linton. “When we told him that we wanted to fund research, to find some answers. He said, ‘You know that it’s a very long, slow process. It doesn’t happen overnight. It’s like moving a beach of sand from one place to another, one grain at a time.’ Now, with over 20 years of research, with the knowledge that has been accumulated, we’re now moving this beach of sand a shovel at a time. We’re seeing a difference, we’re seeing an impact and we’re seeing change. When you have a child that is dying before your eyes—it’s never fast enough. But you know what? A mother’s love, can move mountains.”

After 8 years, I am just as inspired by Elisabeth’s work and story as I was when we first met. Her perseverance reminds me of the many women in my life—my own mother and grandmother in particular—who have fought so hard. This Mother’s Day, and every day, I know that mothers like Elisabeth throughout the world fight for their children—sometimes against seemingly insurmountable odds. We all owe them a great deal of gratitude and respect.

Learn more about The Sanfilippo Children’s Research Foundation on their Charity Profile page.