This fundraiser has ended. Donate directly to the charity: LANGLEY HOSPICE SOCIETY 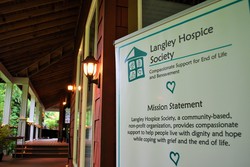 "Clemo's Crusade for Hospice" began with Roy Clements - who is in his early 70's- travelling to England in May of 2015, to complete the Wainwright Coast to Coast (C2C), a 300+ km walk from one coast to the other, across the country, in memory of his beloved wife, Doreen, and in support of the Langley Hospice Society (www.langleyhospice.com).  This Spring will see Roy taking on the 2nd leg of this important journey of remembrance and support by tackling the well-known El Camino de Santiago - also known as the St. James Walk, a more than 800km trek, from France to Spain - all with the committment to increase awareness and support of the Langley Hospice and the provision of quality end-of-life care in the community - for the community.

In 2012, the Clements family received the devastating news that their beloved Doreen had been diagnosed with lung cancer. As Doreen’s disease progressed it became increasingly obvious that, in spite of her courage, a cure was not possible.  Her husband, Roy and their daughters devoted all their time and efforts to making Doreen’s last months memorable as they knew this was what Doreen wanted for her family.

In the final weeks of Doreen’s life Roy realized that he needed help with this final battle and reached out to the Langley Hospice Society. He soon realized that in doing so he had made the right decision.  The caring and professional staff at the hospice helped to ease Doreen’s physical pain and cared for her physical needs while supporting the mental anguish of the family.  Doreen’s passing was peaceful, loving and dignified, embodying all the ideas that she herself embraced.  This was one journey that Doreen did not have to walk alone and very importantly, neither did her family.

Doreen’s family and friends believe that everyone deserves the right to die with dignity in a kind and compassionate environment.  In memory of our much loved Doreen, the members of “The Clements Team” are undertaking "Clemo's Crusade for Hospice" to raise important funds and awareness in order to further enable the Langley Hospice Society to offer increased and continued support to the terminally ill and their families.

For more information, please visit their website at: http://clemoscrusade.wix.com/home or contact the Langley Hospice Society at: info@langleyhospice.com