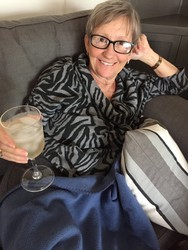 Lois Marie Pronesti – Her Journey with this Disease

Following a 5-week persistent cough, on December 23, 2016, just two days before Christmas, our family received the devastating news that my mom, Lois Pronesti, aged 59, had non-small stage 3B lung cancer. Despite the overwhelming blow of the diagnosis, we had to make some very difficult decisions, and quickly. On January 11, 2017 our family met with the Clinical Trial Oncologists at Jurvinksi Cancer Centre, in Hamilton, ON. where we received even more hard news. My mom’s cancer was aggressive, with a high likelihood of it metastasizing to other areas of her body - the biggest worry being her brain; it was inoperable; and the most crushing news, it was incurable. After undergoing many tests and having many hard discussions, it was decided that she would apply for enrollment in clinical trials for targeted lung cancer treatment. The study would provide no guarantees, as immunotherapy treatment was still fairly new to lung cancer patients, and the short term and long- term effectiveness was still unproven and unpredictable, but the hope was that this trial would provide a better quality and quantity of life for both Lois and her family.

Lois had to go through a series of tests to determine if she was an acceptable candidate for immunotherapy. She would undergo multiple blood tests, physical exams and CT scans, where radioactive dye was injected into her veins. Surgical biopsies of the lung tumour were required to determine how the cancer would respond to the treatment. The outcome of these tests were critical in determining whether Lois was a suitable candidate and be accepted into the trial.

On January 18, 2017, we received word that she was a suitable candidate and would be admitted into the trial with her first immunotherapy/chemo session scheduled for February 7, 2017. The news came with a flood of emotions, relieved to finally have a course of action but also fear, as we all knew it would be a long and difficult journey my mom would begin.

After 13 physically and emotionally draining months of countless blood samples which resulted in phlebitis and requiring a port to be surgically inserted; 4 hour long chemotherapy/immunotherapy treatments, every 3 weeks , which wreaked havoc on her body; which lead to  loss of appetite resulting and rapid weight loss, debilitating fatigue, dizziness, headaches, inflammation of the intestine, hair loss, nausea, joint pain, back pain, severe mouth sores and cankers, shortness of breath, amenia -  requiring blood transfusions, severe coughing; countless medications, appointments and scans. Our family finally received the news we all were so hopeful for, despite the life-sentencing disease; her lung cancer had stabilized and that she no longer required the chemotherapy drugs that attacked her body and could continue immunotherapy every 4 weeks now. Although she would need close monitoring, this was such welcomed news, especially to my mom. It gave her a new sense of hope and freedom to do what she loved; be with her family, especially her daughters and grandchildren, and friends and travel, even if they were just short trips, with my dad. We celebrated her 60th Birthday at Great Wolf Lodge, because that’s where she wanted to take her family. However short, this new sense of freedom was, it gave her the push she needed for her next battle.

Just 5 short months later, during a routine CT scan, the one tumour in her left lung, that had disappeared during her initial treatment, was there again and growing, and again was inoperable. It was clear that the 2 immunotherapy treatments that had given her 18 more months to be with her family, were no longer effective. And that the only course of action would be to undergo radiation, at the hopes of shrinking the new tumour and giving her family more time. Undergoing radiation would mean that Lois could no longer participate in the immunotherapy clinical trial. She underwent several months of radiation, and we were blessed again with news of hope – the tumour had disappeared.

Over the remainder of 2018 and until November 2019, Lois was able to live life.  Although not cancer free, she spent her time with the ones she loved and did the things she loved most. She travelled to Spain, Portugal, Budapest, Serbia, Austria, the Netherlands.  She was there to see all her grandbabies be born, she celebrated birthdays and holidays, and spent time at the family cottage. But in early November 2019, this ugly disease invaded her body again. The tumour grew rapidly and fluid began to build in her lung. Just 8 days after coming together to celebrate my dad’s birthday, Lois was admitted to Jurvinski Hospital with severe shortness of breath, extreme fatigue, and persistent cough, where she was treated for a clot in her lung, and a tube was needed to drain fluid. She suffered 2 mini-strokes and it was apparent that the cancer was taking over. It was determined that the cancer was aggressive and had spread to her brain. There was nothing else that could be done.

On February 20, 2020 at 5:40am, just 1 month after being admitted to the hospital, with her husband, Angelo and 3 daughters, Sarah, Allison, and Stefanie at her side, Lois passed away, at home.

Lois fought a courageous and valiant battle. She showed strength, determination, never-ending hope, and unwavering love and commitment to her family. She leaves behind her loving husband of 41 years, 3 devoted daughters and sons-in-law, 7 grandchildren, and 5 elder siblings. Lois will always be remembered by all those who love her. She will forever be in our hearts.

All donations made will go directly towards Lung Cancer Canada, so that those families facing this disease may be provided with life-saving research and life-changing support.