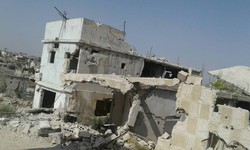 Our story begins in 2016 when we hired Baha to come work for us. We committed at that time to love him, his wife Ola and their 3 children as our neighbours.

Their story began on the 25th of April 2011 when their city of Deraa became surrounded by the Syrian army. Their water, electricity, food and medication were cut off from them. On May 5th, 2011 their house was destroyed and their car run over by tanks. The Bakhash family spent 2 years moving around the city searching for a refuge they could not find.

Daily bombing and air strikes within the city lead them to a decision to make a difficult journey to Jordan where they became refugees on February 10th 2013. Conditions in the camp were not entirely better than their prior conditions. Although no daily threat from bombing, there was still not enough blankets, medication, food or clean water. Developing health concerns due to the poor condition the Bakhash family decided once again to escape.

Now living in a village called Natfeh, the Bakhash family is treated as criminals due to their refugee status. School and work are hard and friends for Ola's brothers (21 & 13) are impossible.

In 2016 Baha and Ola were granted a government sponsorship and were able to come to Canada and start living their life. Their children are growing and thriving and happy, but they have left the rest of Ola's family back in Jordan where they struggle daily.

On our mission to loving our neighbours, we have committed to sponsoring Ola's mother, father and 2 brothers who are stranded in Jordan waiting and hoping to restart the rest of their lives in Canada.

So, how can you help?