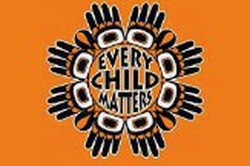 We, like many, were horrified to read about the 215 children's remains were found at a former residential school in Kamloops, B.C.

As Indigenous women, we were fortunate in growing up that I did not have to attend a Residential School.  So many others were not as fortunate.

The Tk'emlúps te Secwépemc First Nation suspect 215 bodies were buried at the site, according to a preliminary investigation. The discovery was made with the help of a specialist in ground-penetrating radar.

A statement from the First Nation said that the missing children, some as young as three years old, were undocumented deaths.

The Kamloops Indian Residential School was in operation from 1890 to 1969, when the federal government took over administration from the Catholic Church to operate it as a residence for a day school, until closing in 1978.

At least 150,000 Indigenous children attended Canada's 139 residential schools from the late 1800s to 1997, according to the Truth and Reconciliation Commission.

Thousands of children who went to these schools never returned home.

A National Indian Residential School Crisis Line has been set up to provide support for former students and those affected.

Emotional and crisis referral services can be accessed by calling the 24-hour national crisis line: 1-866 925-4419.

June is National Indigenous Peoples History Month.  We have committed to running 215 miles each in the month of June to honour and remember those children, and all the other survivors of Canada's Residential Schools.   We are also raising money for the Indian Residential School Survivors Society.

Because EVERY CHILD MATTERS.