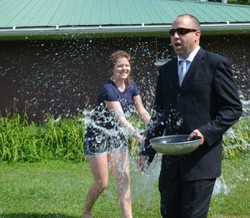 2020 was a year that was tough on everyone. The tough times have hit Camp as well. This year we were unable fundraise in ways that we are normally able to. This year more than any other, camp needs your help. We need your help to provide a fun filled week for kids who have cancer and blood diseases. Your donation will help make sure that we can provide the children with all of the wild, goofy, magical moments that we make every year.

I am going to tell a little story about why I love camp.

There is a friendly rivalry that has been going on between Boy's and Girl's Dorm for many many years. Each year we pull pranks and create elaborate jokes. The year of the dolls was a special year for the girls and really sticks out in my mind as a great camp moment. Early on in the week Creepy Dolls began to turn up in the Boy's Dorm in the morning. One time there was one sitting in the middle of the floor with a creepy note attached. Then there was one on the mirror in the bathroom that a confused delivery man found before we did. We thought the dolls were cute but they weren't scaring the older boys. Nothing could scare them I bet. That is until the camp fire on the last night. We all sit around in a big circle and have a talk about our week. It is a nice bonding moment. We had just finished our chat when a noise started coming from deep in the woods. Then beams of light shot up into the trees. We could hear the murmur of voices but they were too far away to hear clearly. I looked around the fire at the boy's faces. They were not so tough now. They sat frozen to their lawn chairs, watching as the mass of voices and light approached through the trees. As they emerged from the woods we could hear them all repeating "WHY WON'T YOU PLAY WITH US?" over and over again. The flashlights lit their faces and they were all haunted broken dolls. They circled us and marched around getting in our faces chanting their blood chilling question over and over. I looked over at the teenage kid beside me and he looked like he didn't know whether to run or to just hope it would end quickly. As the girls retreated into the woods still chanting as one, we stood and applauded them and called them back to the fire. Then we all sat together and laughed about how bad they kicked our butts that year.