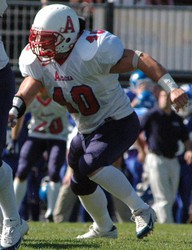 In the spirit of giving back and honouring a legend, Macquarie is joining forces with Acadia University to support the Stephen Faoro Memorial Award. Donations made through the link below between May 15th and July 15th will be eligible for 1:1 donation matching through the Macquarie Group Foundation.

A "larger than life" personality, Steve Faoro was a football Axemen enrolled in the Bachelor of Kinesiology program at Acadia University from 2002 to 2006.  During that time, he made an impact on the lives of his teammates and those in the university and Wolfville community.  Steve was involved in so many on-campus programs including SMILE and Kinderskills. As an athlete, he was one of top defensive players for the Axemen. In his final two seasons he was named the Atlantic University Sport (AUS) Defensive Player of the Year and was a three-time AUS All-Star.  Steve was a team captain and won two AUS Conference Championships.  Former teammates and friends of Steve established the Steve Faoro Memorial Football Award, to be awarded to a returning varsity football athlete(s) who demonstrates leadership qualities on and off the field and is in good academic standing. The recipient(s) will be chosen by the Director of Athletics in consultation with head coach of the men’s varsity football program. The inaugural disbursement of funds will be for the 2021-22 academic year.