All gifts made through this Canada Helps portal will support the efforts of United to Help Syrians.

Formed in late 2015, United to Help Syrians is a coalition of committed volunteers from Trinity United (Grimsby); St. John's Presbyterian (Grimsby); Fifty United (Winona); Smithville United (Smithville); and Wesley United Church (Fruitland). Together, we are united in helping to raise over $27,000 to sponsor at least one Syrian family and then helping them to feel at home when they arrive in the Grimsby area (located in SW Ontario, between Hamilton and Niagara).

Trinity United has graciously agreed to act as our charitable organization partner, meaning they can officially receive donations and issue charitable tax receipts for donations on behalf of United to Help Syrians.

To learn more about United to Help Syrians, please go to our website: www.UnitedtoHelpSyrians.com 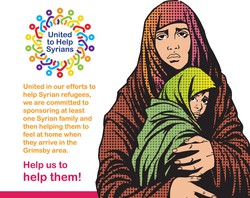