"Love your Neighbour as yourself". We, as Christians believe that we must love our neighbours, whether our neighbour is just around the corner, or halfway around the world.

UPDATE: As of November 2019, Lesotho is experiencing a serious drought. This drought has had a serious impact on Rachel's Home. Their vegetable garden, a major source of fresh vegetables, has failed. Assistance is needed to ensure that the children at Rachel's Home receive proper nutrition.

Lesotho is a desperately poor African country. It's one of the poorest nations on earth and has one of the highest rates of HIV infection on earth. Roughly 200,000 children in Lesotho have lost one or both parents. In a small border town called Maputsoe, Rachel's Children's Home is making a difference in the lives of these children.

The story of Rachel's Home is very typical of orphanages in the Majority World. Hilda and Godwill a young couple, woke up one morning to find an infant abandoned at their front door. How did that child end up at their front door? In Maputsoe, with all its troubles, the possibilities are legion. In any event, they took the child in and raised her as their own. In a town as small as Maputsoe, word gets around pretty quickly and it wasn't very long before other young children showed up at their door. This was the birth of Rachel's Children's Home.

In 2006, a young South African doctor introduced Central to Hilda & Godwill's mission at Rachel's Home. 2016 marks our 10th anniversary there and we continue to support Hilda & Godwill's efforts to provide a loving, Christian home to orphaned and abandoned children in Maputsoe.

Hilda & Godwill demonstrate that most basic of lessons.  Local people, often with little more than their rock solid faith in God, are the positive change that places like Lesotho need. All we need to do, is to walk humbly along side and support their efforts.

How will your donations make a difference?

Your donations, buy food, pay student tuitions and pay teacher's salaries. In Canada, our mission is managed entirely by volunteers. Our mission has no overhead costs. So, every penny goes directly to our mission in Lesotho. 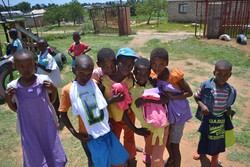