Be a Buddy to Buddy

Buddy was at death's door when one of his caretakers trapped him in early December and rushed him to the VETS Toronto Animal Hospital. He had lost a lot of weight and his beautiful black coat was severely diminished and grey down to the skin. The fleas infesting him were, literally, eating him alive.

He was given treatment to combat the fleas and hooked up to IV fluids because he was severely dehydrated. His IV treatment took almost a week.

Buddy's mouth was in horrible shape: inflamed, broken teeth and some which looked infected. He had a few teeth removed, a broken canine, and already had a missing canine. He still has a few teeth left and one canine. (Click below to see images of the extracted teeth).

Being on antibiotics for the week helped heal his mouth and it was then that the vet noticed his tongue was severely cut. She suspects that is why his coat looked so bad — he couldn’t clean himself or eat because of the extreme pain he was in.

The culprit of his tongue injury may have been an empty can of cat food someone left near the colony thinking they were helping. These tins have sharp edges and should never be used to feed cats outside (or inside).

Buddy is a lucky boy and is recovering at the home of one of his colony feeders. 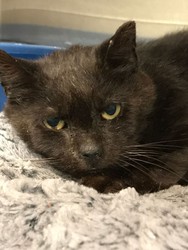