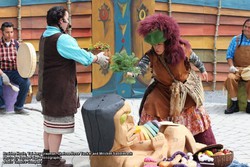 In the age of looking down at electronics, Axis Theatre draws young eyes up to engage them in interactive and relevant live theatre. Our production of ROBINSON CRUSOE + FRIDAY will set sail on a second cross-Canada tour in September 2018, one that will take us into the USA for the first time in over 10 years and finish in Toronto, ON in December. SOMEBODY LOVES YOU, MR. HATCH will head to Ontario and finish off with two local festivals, The Surrey International Children's Festival and the Vancouver International Children's Festival in May/June 2019. TH'OWXIYA: THE HUNGRY FEAST DISH by Kwantlen playwright Joseph A. Dandurand had a spectacular season at Western Canada Theatre, The Talking Stick Festival, individual performances at the Frederic Wood Theatre, The Massey Theatre and in Whistler. A highlight was two performances in the Kwantlen Cultural Centre in Fort Langley. Next up, Yellowknife and the rest of Canada in 2020.

Axis Theatre also has a brand new production opening in February 2019 called THE TROLL GRANDFATHER by Alberta playwright Clem Martini. Many other development ideas are also brewing - check out our website for new adventures.

Stretching the boundaries of live theatre, Axis has produced over 58 original works and has recently been awarded with two Jessie Richardson Awards for SOMEBODY LOVES YOU, MR. HATCH by the Vancouver theatre community in 2017, three nominations for TH'OWXIYA: THE HUNGRY FEAST DISH in 2018 and was named the BC Touring Council's Artistic Touring Company of the Year in 2017.