Badminton Canada is recognizing the outstanding contribution of Coach Abdul Shaikh by inducting him into the Badminton Canada Hall of Fame in November 2018. We are also as starting a Bursary Fund in his name with the annual proceeds committed  to supporting a  top junior player from British Columbia to compete internationally at events like Pan Am Junior Championship or World Junior Championships.

A little bit about Coach Shaikh....

Originally from India, Abdul Shaikh arrived in Toronto in 1967 with his wife and two children as India’s premier badminton players. As an aspiring and talented badminton player, Shaikh first began his involvement in the Canada Games in 1971 as a competitor in the Canada Games in saskatoon. In his debut Canada Games, Abdul won gold in the Individual Men’s Doubles in badminton while partnering with Cam Dalgeish. Abdul continued to represent Canada as an athlete until 1999 where he retired from competing. Thankfully, Abdul was not finished with his contributions to the sport of badminton as he took his long developed passion and expertise as an athlete and applied it to coaching. Shaikh’s first appearance as a coach was with Team Saskatchewan in 2003, his coaching career later lead him to representing Team BC for the 2011 and 2015 Canada Games; he is anticipated to coach Team BC in the 2019 Red Deer games as well.

With his prior commitments in mind, it is no surprise that Abdul Shaikh was inducted into the Canada Games Hall of Honour in 2015. Awarded within the Builder category for his exceptional contribution to the development and advancement of the Canada Games Movement.

Abdul’s dedication was celebrated as he was recently presented with the Daryl Thompson Award for his outstanding contribution to the sport of badminton as well as his performance as a coach over the 2017 season. The Daryl Thompson Award recognizes individuals who have contributed their time in an extraordinary way to sport throughout their lifetime or has made a major contribution to amateur sport in British Columbia.

Impacting his community on a local level, Abdul was the Racquets Professional at the Vancouver Lawn Tennis and Badminton Club for 30 years where he instructed and assisted athletes competing in badminton, squash, as well as tennis. After retiring from his time as a coach at the club, the badminton hall was renamed to “The Abdul Shaikh Badminton Hall” honouring his many years of quality service.

Shaikh’s impact on the Canada Games and Badminton Canada resonates deeper than the awards and distinctions he has received. His passion, dedication, and mentoring are all life long contributions that have impacted the badminton community across Canada. 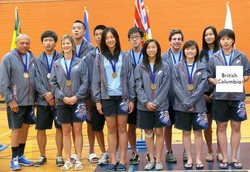