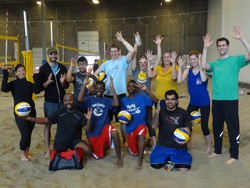 Promoting awareness, acceptance of, and encouraging all British Columbia Deaf and Hard-of-Hearing athletes so they may compete in provincial level sports and national level sports.

About BC DEAF SPORTS FEDERATION

The BC Deaf Sports Federation (BCDSF) is a non-profit organization functioning as the umbrella for deaf and hard-of-hearing athletes in British Columbia.

The BC Deaf Sports Federation (BCDSF) was established in February, 1975. However, the inspiration for the creation of BCDSF began eleven years earlier. In 1964, a four-member committee formed to raise funds for the BC teams wanting to participate in the 9th World Summer Games for the Deaf in Washington, DC, in 1965.

Since the Deaf World Games (now called Deaflympics)occur every four years, two other committees supporting BC Deaf athletes were formed in 1968 and in 1973. In 1974, it became obvious that a provincial organization was needed to manage and support BC's Deaf athletes. By 1978, BCDSF was officially incorporated and has since been assisting to organize, support, and encourage Deaf and Hard-of-Hearing athletes to participate in competitive and recreational sports on provincial, national and international levels.

"We couldn't have done it without you - thanks so much for your support."

"I have to thank BC Deaf Sports Federation and Canadian Deaf Sports Assocation for their funding to help me achieve my dream to compete at the PanAm Games for the Deaf and the Deaflympics. It has been truly been a dream come true. "