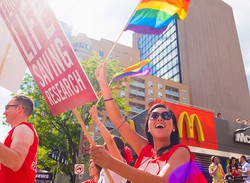 The Canadian Foundation for AIDS Research (CANFAR) is dedicated to funding all aspects of HIV research – from prevention,?increased testing, improved treatment for people living with?HIV, stigma, to the search for a cure. Through funding innovative research, dynamic partnerships and national awareness programs; CANFAR remains a trailblazer in its mission to end HIV in Canada.

Over its 30-year history, CANFAR has invested more than $21 million in HIV and AIDS research projects, and awarded more than 400 grants across Canada. Annually, CANFAR reaches thousands of Canadian youth through its national HIV youth awareness programs.

CANFAR is proud of the national role it has played in funding breakthroughs in HIV prevention, testing, access to treatment, stigma and the search for a cure. Over the past three decades, our donors have supported research that has changed the lives of those who are living with HIV. Some of these breakthroughs have included, but are not limited to: the development of preventative medications, the improvement of the quality of life for new mothers living with HIV, and discoveries of new ways for testing HIV treatments.

"“I believe in the power of HIV research, and the results that improve the lives of people living with HIV”"

"“HIV/AIDS research has revolutionized the way gay men can live their lives. With awareness and access to prevention and treatment, including the implementation of an HIV medication that is used for PrEP (pre-exposure prophylaxis), the hope is that new infection rates will continue to diminish.”"