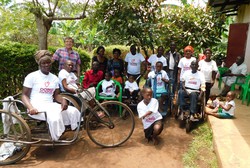 CanUgan Disability Support provides assistive devices to people living with a  physical disabilities in Kasese, Uganda. These devices enable individuals to gain independence and to meet their mobility and communication needs.

Of Uganda’s population of 33 million, 16%, or well over 5 million Ugandans are people living with disabilities. Caught in the vicious cycle of poverty and disability, they experience extreme poverty and represent one of the most marginalized groups in the country.

Since independence from Britain in 1962, Uganda has experienced a number of internal conflicts and uprisings, which killed and injured scores of Ugandans. Hundreds of people were rendered homeless and multitudes of children were orphaned. Hidden land mines and thousands of child abductions significantly increased the incidence of disability in Uganda. In addition, absence of adequate child and maternal care as well as inadequate immunization programs result in large numbers of congenital impairments.

With a population of over 600,000, Kasese is one of the poorest districts in Uganda. Located in the Western Region on the border of the Democratic Republic of Congo (DRC), Kasese was a focal point of insurgencies and conflicts. Its precarious geographical location and rampant poverty make the district particularly vulnerable to HIV/AIDS, malaria and other diseases thereby increasing the numbers of persons with disabilities..

While they are impaired, people with disabilities assert that DISABILITY IS NOT INABILITY. Through access to assistive devices, many Ugandans with disabilities could pursue vocational training and income generating activities positively impacting their daily life.

The project in Kasese began informally when we arranged to provide a tricycle to Biiara Gatrida, a woman with a history of polio. Although her mobility was impaired, she had acquired skills in basket making, weaving, tailoring and handicrafts. She also trained other women with disabilities in making these products. However, independent mobility and transportation was a monumental challenge. With a generous gift from a couple in Ottawa, we found a local workshop in Kasese to build her a tricycle.

This sparked a campaign in which 20 Canadian friends and colleagues contributed between $50 and $200 each. Their gifts led to the construction and distribution of 13 tricycles to people with disabilities. Due to increased mobility, a number of recipients now have access to the market and have begun their own small businesses. Some have engaged in cross-border trade between Uganda and DRC and selling charcoal and other household necessities. The impact these vehicles have made to the increased independence, mobility and economic access shows how even small gifts can make a big difference.

At present our focus is on providing locally-made tricycles, and purchasing through local suppliers  various assistive devices such as crutches, white canes, raised shoes, surgical boots and calipers..

All of this work could not happen without the Kasese District Union of Persons with Disabilities (KADUPEDI) our local intermediary in Kasese and its three member team who identify potential recipients for assistive devices. The work of this team of passionate and committed volunteers is critical to the success of CanUgan.

CanUgan also has an exciting partnership with Carleton University’s school of Industrial Design. Work progressed on designing a wheelchair that can be converted into a tricycle so that it can be used on both rough and smooth surfaces. Prototypes of this “2 in 1” were built and tested both in Kampala and Kasese. More work needs to be done to perfect the device to make sure it meets the needs of persons with disabilities.

WHAT WE DO WITH YOUR DOLLARS

CanUgan is a 100% volunteer based organization, which means that every dollar we receive by donation is used to purchase, build, and maintain assitive devices. Not only that, but because we purchase and build devices locally in Kasese, we are helping to sustain the local economy and supporting local artisans. Your donation means a gift of mobility to someone living with a disability. This ensures they have the means to rejoin their community, attend school, obtain meaningful work, and support their family.

We're working together to change lives and communities.