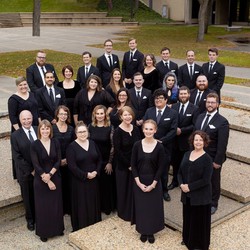 A “rapidly rising star in the Canadian choral scene” (Anacrusis), Chronos Vocal Ensemble has built a reputation for innovation and excellence. Since its inception in 2013, the choir has delighted audiences in four provinces and performed at distinguished events including Music Conference Alberta and Choral Canada’s 2016 and 2018 Podium conferences. The ensemble regularly commissions Canadian composers and also runs an annual composition competition.

The choir has released three successful recordings, including Presenting Chronos Vocal Ensemble (2015) and The Simplest Way: The music of Trent Worthington (2016), reviewed glowingly in Anacrusis magazine: “I would highly recommend this CD to lovers of choral music… very fine singing.” The most recent release is Fresh: New Music From Canada, featuring new music from eleven Canadian composers. Chronos is regularly heard on CBC Radio.

In 2015 Chronos Vocal Ensemble won Choral Canada’s biannual Competition for Canadian Amateur Choirs, and in 2016 was recognized by the City of Edmonton’s Salute to Excellence for bringing recognition to Edmonton.