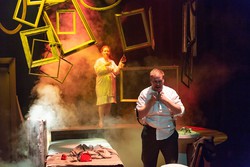 We are a professional chamber opera company, specializing in rare and unusual repertoire - with an emphasis on Canadian themes and artists.

We gave the British Columbia premiere of 'Der Kaiser von Atlantis', in co-production with the Vancouver Holocaust Education Centre.

We gave the Canadian event premiere of 'Sumidagawa & Curlew River', in collaboration with numerous groups in the Metro Vancouver Japanese and Asian communities.

We received a $250,000 commissioning grant from the Annenberg Foundation of Los Angeles, this for a new work set at the Battle of Fallujah. A profoundly anti-war piece, its sub-text is PTSD. Based on the experiences of Christian Ellis, the libretto is by Iraqi-American Heather Raffo and music by Canadian Tobin Stokes. It was also produced in Los Angeles and New York City in 2016, and won an LA Emmy in 2017.

We commissioned and gave the world premiere of Margaret Atwood's first opera, 'Pauline', with music by Tobin Stokes and based on the remarkable story of Canadian original Pauline Johnson. Directed by Norman Armour, and presented at Vancouver's York Theatre in May 2014, it sold out all five nights, and was given in Québec in 2015.

'The Lost Operas of Mozart' was produced at Christ Church Cathedral in October 2016. These are three comedies he started, but never finished. It starred Bramwell Tovey as The Impresario, earning full houses and great laughter every night.

'Missing' was set in Vancouver and along the Highway of Tears. It told a story everyone knows, about a woman no one remembers. Co-produced with Pacific Opera Victoria, its libretto is by the distinguished First Nations writer Marie Clements, and its music by Juno Award-winning Brian Current. It received 14 performances in 2017. A tour is planned.

At the Cultch, in September 2018, we ran the legendary 'Nigredo Hotel', by Nic Gotham and Ann-Marie MacDonald, a bizarre operatic thriller, a black comedy, and a dazzling theatre piece that starred Tyler Duncan and Sarah Vardy.

Year-round we give numerous concerts and recitals in the Downtown Eastside and across Metro Vancouver. By March 2019, we had presented 130 such events -- 40 of them in the DTES alone.

Coming next, BERLIN: THE LAST CABARET, a collage of opera, jazz and cabaret set in the Weimar Republic, and examining how a time of daring experiment in the arts was finally crushed by an agenda of lies, fear, hatred, and the egomania of one man. January 2020, Performance Works.

Currently in creation, our next commission, CHINATOWN, a story by Madeleine Thien told across three centuries. September 2021.

We do intimate, eloquent, powerful music theatre, and are immensely grateful for your support.

About City Opera of Vancouver Society

OR, see our entry at City Opera of Vancouver in Wikipedia.