Losing a long-time companion is devastating. When it’s a pet, it always feels too soon when death creeps in. I lost two of my best friends, within less than a year. Piglet, who was by my side for 17 years, was my cherished ginger feline, who time after time, reminded me I was not alone. He was my guardian. When he fell sick and I rushed him to the hospital, tests revealed the presence of carcinoma. Just 10 days later, my loving cat passed away.
With Angus, my black and white feline, the process of saying goodbye drew out for months. I was on an emotional rollercoaster, thinking I’d lose him, and then he would somewhat recover in the ninth hour. But never fully. Despite many tests, his ailment remained a mystery. He’d had a stroke and suffered from paralysis. But his appetite remained strong, so I would cling to hope that he might recover. As he became weaker and eventually emaciated, he sought refuge in my sweatshirt, the only time he ever let me hold him. These are moments laced with sadness, but they are times I will cherish as I knew he felt comforted in my arms.
The loss of Piglet and Argus has had a dramatic effect on both me and my remaining companion, Mino, my sweet Siberian Husky. Vet bills and the costs of daily meds for both my boys have mounted. Over the past years I have accumulated a debt of more than $10,000 taking care of my family, and trying to ease their pain as much as I could. Now I’ve been told that Mino needs dental work. The cost for the surgery has been quoted around $2,000. I have no means to pay for the expense of the operation. I’ve reached out to CAWES and the organization is assisting me as I send this message to ask for help. All money received will go directly to paying for Mino’s care. Thank you for considering this request, and for your compassion towards our deeply loved furry friends. 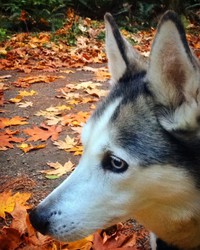