While animals in nature generally take good care of their young, sometimes they can’t take care of them all. A Nova Scotian property owner discovered she had two fox kits that had been left by their mother who prioritized the survival of her other two kits from the same litter. The homeowner saw the remaining kits’ condition deteriorating and contacted CWRC for help.

CWRC worked with the homeowner, the NS Department of Lands and Forestry, and others in the community to get the foxes, one male and one female, into care at our licensed facility where trained staff and volunteers could give them the best possible chance of survival.

Both foxes were in very bad shape. They were dehydrated and undernourished with signs of ongoing worsening condition. They had lost not only body fat but also muscle mass. They were dull and depressed. The male was in better condition from the outset, a bit more alert and responsive, less severe skin lesions, and no signs of any secondary infections. He was already keen to get away from us at intake and showed signs of improving early after the initial treatment.

Unfortunately, his sister's condition was more severe and she did not respond to initial treatment and we were not able to save her. The male is still in our care and receiving the best treatment we can offer him.

We’ve named this little guy “Fawkes” after the phoenix in Harry Potter. We hope that, like a phoenix, he will rise from his difficulties and find new life.

Fawkes is starting to remember he’s a fox and has shed much of the crusty buildup on his skin. He’s a little escape artist (as he should be) but is only just starting to show little suggestions of 'who he is as a person’, so to speak.

However, Fawkes is not out of the woods yet. He was badly starved, he's still dull, he has a lot of muscle mass and fat to pack on, and he still has to turn over his skin and regrow his coat. He's on a long course of antibiotics as well as serial Revolution treatments.

Fawkes is going to be with us for a while and he’s going to need a lot of food, veterinary care, and some rotating enrichment to stimulate his mental recovery. CWRC needs a minimum of two people any time he needs handling beyond quickly transferring him between enclosures, which also requires more resources.

He’s improving but Fawkes has a long way to go. We’re asking for your help to make sure that Fawkes and other animals like him get the care they need. Please donate today - or consider becoming a monthly donor to help us meet the ongoing needs of this little guy and others. 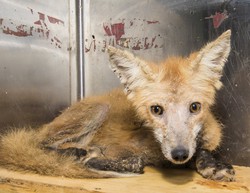