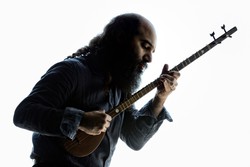 Constantinople is a crucible for musical creation and production. In the group’s artistic explorations over the last fifteen years, the music of Persia and various Mediterranean cultures—along with their creative concepts—have served as the raw materials and matrix for the creation of new works.

Rooted in both musicological research and a desire for new musical creation, its projects draw upon the repertoires and practices of several countries extending from the Middle East to Mediterranean Europe, and even range as far as the New World. This hybridization of musical forms, repertoires and practices, which at first appear disparate and remote, has become the group’s trademark. With its high-quality productions, Constantinople has distinguished itself as a unique voice on the world’s music scene.

Constantinople is regularly invited to international festivals, where it is warmly received by the public, music professionals and critics alike. It has performed on many of the world’s major stages, including the Festival d’Aix-en-Provence (France), Salle Pleyel (Paris) the Festival of World Sacred Music in Fez (Morocco), the Festival d’Ile de France (Paris), the Onassis Centre (Athens), the Festival de México en el Centro Histórico (Mexico), the Festival de Lanaudière (Quebec), and MusicFest Vancouver (Canada).

In addition to its tours in France, Italy, Portugal, Spain, Belgium, Holland, Greece, Lebanon, Iran, Cyprus, Morocco, Canada, USA and Mexico, Constantinople presents each year a season of three to four productions in Montreal, whose visibility and impact continue to grow. Most of the group’s concerts have been recorded and broadcast by Radio-Canada, and several have been relayed to European audiences via the European Broadcasting Union.

Constantinople has recorded ten albums on the ATMA label, and has recently signed with Analekta.

Constantinople is the story of a musical ensemble that chose the journey as its cornerstone—geographical journeys, but also historical, cultural and inner—and to seek inspiration from all sources, to aim for distant horizons. Drawing inspiration the ancient city illuminating East and West, the ensemble, founded in 1998 in Montreal, was conceived as a forum for creation, encounters and cross-fertilization.

Since then, as seasoned travellers, the musicians of the ensemble have ceaselessly explored a wide range of musical avenues: from mediaeval manuscripts to contemporary aesthetics, from Mediterranean Europe to the East and New World Baroque.

Over the past decade, the group has developed over 30 new works and staged nearly 100 cities in 20 countries.

"Count this concert as a brilliant conceptual coup for organizers Early Music Vancouver and Caravan World Music Rhythms, and a sonic cornucopia that will ring fresh in listerners’ memories for a long time to come "