On December 20th, Larry Lenske, the Nature Centre’s treasurer and one of our most long-standing and dedicated volunteers, turns 70!  He’s decided to do a fundraising campaign for the Cowichan Estuary Nature Centre to mark the occasion. Larry has been crunching numbers for the Nature Centre since our first development grant applications were submitted in 2011, and for every budget and financial statement since we opened our doors on Earth Day in 2012.  If there is anyone who truly understands how critical core operational funding is for a small non-profit to do its work in the world, it’s Larry.

Larry’s Fundraising Goal: Larry’s goal is to raise $5,000 by his birthday to support the Estuary Nature Centre in continuing to provide people of all ages, and especially young people, with experiential nature education and opportunities to engage in hands-on watershed restoration work on the banks of the Cowichan and Koksilah Watersheds and the Cowichan Estuary where these rivers meet the ocean.

2. Send a cheque made out to the “Cowichan Estuary Nature Centre” to CENC, 1845 Cowichan Bay Rd, Cowichan Bay, V0R 1N2

3. Bring cash or your cheque book to the birthday party on December 20th (see below)

If we raise $3,000, he will bungee jump nude into the Nanaimo River in March (Bonus: this is also a fundraiser for the BC Schizophrenic Society.)

If we raise $5,000, on winter Solstice, December 21st, Larry will swim from the Kayak Launch at the Cowichan Marine Gateway to the beach at the Cowichan Estuary Nature Centre. He’ll be looking for a Cheering Section and Witnesses, and paramedics will definitely be welcome. Larry says he’s really hoping we raise $4,999.

And There Are Prizes! Every person who makes a donation of $500 or more will get to choose one of the following prizes:

Some Background – or How Did Larry Get Involved with the Nature Centre? Larry’s long-time partner in life and adventure is Jane, one of the Centre’s founders and its current board chair. A decade ago, in the midst of meetings to develop Cowichan Bay’s new official community plan it became clear that lots of people living locally didn’t know much about the Cowichan estuary, this complex and magical intertidal ecosystem on our doorstep, and its role in the health of the whole Cowichan Watershed. In February 2011 Jane came home from the Fishermen’s Wharf excited about an economic development funding opportunity that looked like a fit for building a Nature Interpretive Centre on the Cowichan Estuary - a place that would offer a window into learning about the estuary and ultimately falling in love with and caring for this place. Larry was game (or was that cajoled?) to do the many hours of number-crunching needed on grant applications and to support Jane in launching a local fundraising campaign. The Cowichan Community Land Trust agreed to be the sponsoring charitable non-profit; and the rest, as they say, is history.  Now the Centre is almost eight years old, has recently become its own separate charitable non-profit, and Larry is keen to help it continue to be able to engage youth in learning, leadership and restoration, and to do this work long into the future.

Despite being a long-time financial officer for Canada’s Agency for Cooperative Housing, Larry has often described himself as being Jane’s “lovely assistant”, or perhaps “beleaguered assistant”, in implementing her dreams and schemes. Truth be told, Larry is as passionate, in his way, as Jane is about what the Nature Centre does in the world - engaging people, both local and from afar, and especially young people, in having direct hands-on experiences in the estuary, giving them the opportunity to:

A core part of Larry’s life is spending as much time as he can in the wild. When he’s not working on spreadsheets, he can often be found hiking the West Coast Trail – a 7-day backpacking trip he’s done 22 times, usually twice a year including an annual hike with grade 11 and 12 students from Frances Kelsey High - or hiking other trails or mountain paths here on the West Coast. This may better explain the value of the $500 “West Coast Trail Training Package” prize described above. And if you enjoy the training hikes and want to do more, Larry leads an annual September West Coast Trail trek.

What Your Support Means - The Big Picture:  Larry says he sees this work as a local way to be a meaningful part of addressing eco-system destruction, species extinction and climate destabilization, while staying grounded in and connected to a special local place.

The Hub in Cowichan Station

Marimba is lively, feel great music with its roots in Zimbabwe. “Machikichori” will be our wonderful local marimba band for the evening. Dancing encouraged! 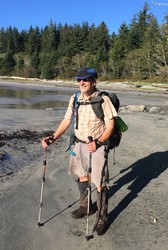