Developing World Connections is proud to support the We Yone Child Foundation (WYCF), a Sierra Leonean NGO with a mission to provide sustainable, high-quality education and care to over 300 underprivileged children in Kroo Bay and George Brook, two slum communities in Central Freetown. Sierra Leone suffers from extreme poverty with over 70% of the population living under the poverty line.

The 2014 Ebola epidemic is the largest in history, affecting multiple countries in West Africa. As of late December, over 9,000 cases of Ebola have been reported in Sierra Leone with almost 2,500 people dying from the virus. It is rapidly spreading in Freetown with an estimated 50-100 new cases diagnosed each day.

The We Yone Child Foundation has been working with various other on-the-ground NGOs, such as the Street Child Foundation, to assist with Ebola prevention. This has included hosting informational seminars, teaching proper sanitation and hand washing techniques, and giving out soap.

On December 26th, WYCF launched their Community Ebola Education program with a group of 10 Community Based Organisations (CBOs) in Freetown. This trusted network of CBOs has unique access to slum communities around Freetown with the goal of reaching around 5,000 people. Almost 40 community educators, including two social workers, have been trained to carryout house-to-house sensitisation to help educate people about the deadly virus.

WYCF has also been assisting with providing and delivering emergency supplies, such as rice, salt, palm oil, water, onion, and soap, for families under the ongoing quarantines. This initiative is currently supporting the families of 49 children in Kroo Bay, and WYCF will continue to expand their efforts where there is a need.

Here are examples of where your donation will go:

A new school for the children of George Brook

Our first volunteer team began work on rebuilding the Temple of Faith Primary school in the hillside community of George Brook in April 2014. Once this project is completed, over 150 children will have six spacious, well-lit, and safe classrooms to learn in. The group was able to finish the retaining wall and some of the foundation; however, the project is far from complete.

Due to the Ebola outbreak in West Africa, we have not been able to send teams back to Sierra Leone to finish the school this fall and we will likely not be able to do so for quite some time. However, with your help, we can send funds to We Yone Child Foundation so they can hire local labour and buy building materials to finish the project. As of late December 2014, the school is almost complete.

All donations will receive a Canadian charitable tax receipt. Thank you for your support! 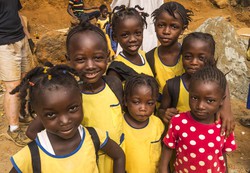